“Sustainability is the capacity to create, test, and maintain adaptive capability. Development is the process of creating, testing, and maintaining opportunity. ” (Holling, 2001)

Human-nature systems and social-ecological systems resemble the natural systems in such a way that they evolve through time. Holling proposes a theory to understand the dynamics of such complex systems. Holling explains that these complex systems have “hierarchies” which are “semi-autonomous levels that share similar speed” of evolution. Hierarchical levels interact by exchanging information and materials. Withing a big, complex system there are subsystems that evolve at their own speed of evolution, meaning that they grow, accumulate, restructure and renew themselves. This repetitive process, was named “adaptive cycle”. To quickly resume, Holling explained that complex systems evolve though a never-ending adaptive cycles that take place in nested sets of hierarchical scales.

There are three properties that shape the adaptive cycle: (i) inherent potential or wealth (ii), internal controllability (iii) and resilience. Within a system (or subsystem) (i) the potential, or wealth, sets the limits of what is possible; (ii) the internal controllability determines the degree of control of its own destiny; and (iii) the resilience measures how vulnerable it is to unpredictable shocks.

A few years ago NOKIA committed to ethical and sustainable business practices. As part of this sustainability strategy NOKIA made itself responsible to extend its sustainable practices throughout the whole supply chain. The system to be analyzed is NOKIA and their major supplier: a Chinese company. NOKIA is a company with hundreds of suppliers, the “Chinese supplier” is also a big company with other clients. To state hierarchical levels, companies would be the highest level in the system. Inner organization within the company would be considered as lower hierarchical levels. This means that NOKIA and its “Chinese supplier” are both in the same hierarchical level.

Nokia being a mature and international company, is assumed to have high potential, or wealth, high internal controllability and low resilience. Its is conservative (K) according to the adaptive cycles stages. Its has a rigid system, and costs of unpredicted failure are quite high. Internally, NOKIA allows for new ideas and innovation through at lower hierarchical levels such as through projects or strategies. The interactions between levels i.e the “sustainability strategy” and the NOKIA, enable the tested sustainable innovations to permeate from lower levels to higher, i.e NOKIA. In other words, NOKIA allows for smaller self-organized controlling processes take place (through lower hierarchical levels). This allows NOKIA to be sustainable at an organization level while permitting creative change.

The “Chinese supplier” seems to be a big and well established company, having high wealth and high internal controllability. It is also positioned in the K, or conservation stage of the adaptive cycle. Though this organization would seems to have high resilience, meaning that it has a great ability to “resist external influences and persist, even beyond the point where it is adaptive and creative” (Holling, 2001). This organization has a very rigid control and strict routines. They seem reluctant to change. For example, when new sustainability measures were proposed, even the most easily adopted were not very much welcome. Additionally self-organization between workers was highly discouraged, and the organization didn’t appear to have allowed spaces for experimental process to take place. This organization resembles a sustainable but maladaptive system, and seems to have a rigidity trap.

To incorporate sustainability measures into NOKIA supply chain helps them be aware of potential problems in their production chain. The “Chinese supplier” is not just maladaptive, which represents a problem for the quality of life of the workers, but is also a collapse just waiting to happen, which represents high risk situation for the NOKIA organization itself.

As mentioned before NOKIA’S “Sustainable strategy” is a lower hierarchical self-organized entity within the NOKIA system (NOKIA & “Chinese supplier). Its has its own evolutionary characteristics: high potential, low internal control and high resilience. It is a reorganization state according to the adaptive cycle (α). NOKIA tried to incorporate their “Sustainable strategy” into the “Chinese supplier” organization, through normative pressure, but the way they did it (during the documentary) showed lack of structure and control, but also flexibility and experimentation. Through this trial and error process I believe that NOKIA will develop a more controlled and efficient way to exert it normative pressure (evolving towards a more conservative state, K). 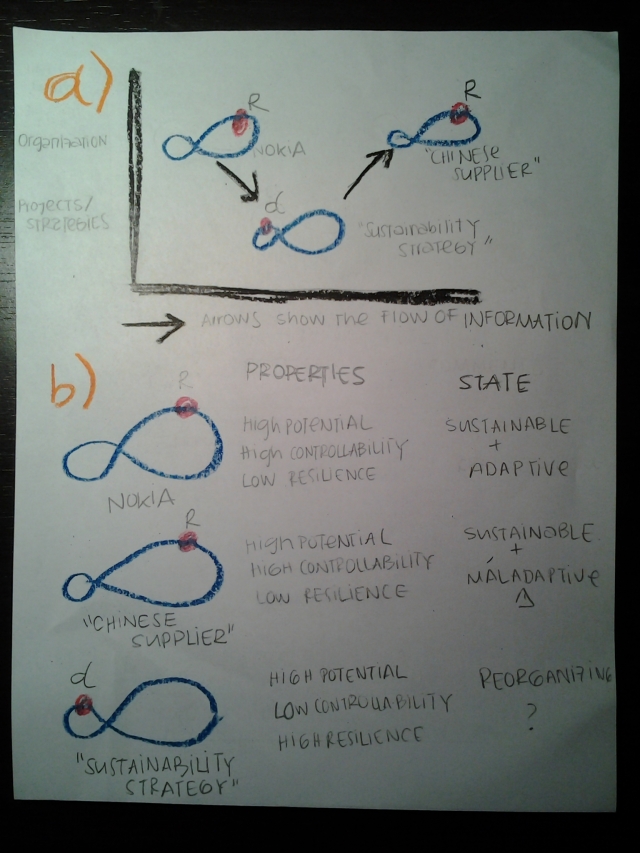